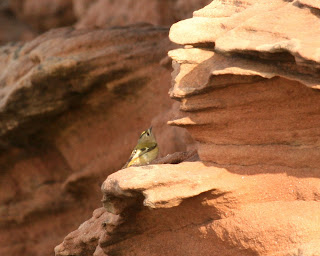 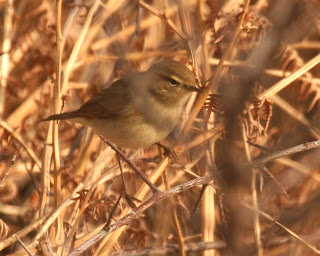 Another excellent day started with early morning fog bringing some Goldcrests (left) and Chiffchaffs (right) in off the sea at the north end, 14 Jackdaws over and 2 Sand Martins moving east. As the sun broke through Goldcrests continued to drift in throughout the morning with the odd Chiffchaff and were eventually logged at 35 and 8 respectively. 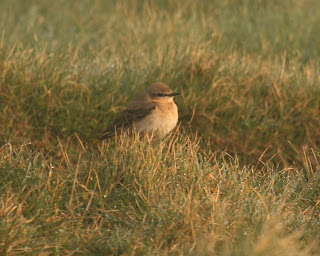 Two males and the first female Wheatear (left) were also early arrivals, while finch numbers were moderate at 15 Linnets, 12 Goldfinch, 10 Chaffinch, 10 Greenfinch and 10 Siskin, but 4 Reed Buntings and 2 House Sparrows were good records for a March day.
Meadow Pipit numbers increased to 60 as their spring migration got under way, but far and away the star bird of the day was an exceptionally early Tree Pipit that called and flew south low over observers at about 10.00hrs. This could possibly be the earliest ever record for Tree Pipit on Hilbre, and is very early even in national terms.
On the sea the male Eider was again noted, also 11 Great Crested Grebes and a Gannet. 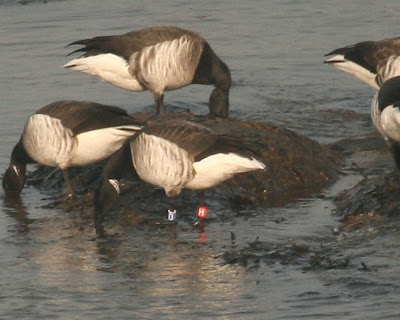 The Brent are now slightly down in numbers on the winter peak, but the Dublin ringed bird (left) was showing well.
Other birds passing through during the morning were a Rook, a Starling, a Blackbird, a Grey Wagtail, 15 Pied Wagtails, 8 Wood Pigeons that flew south, and a Skylark (below) which unusually for that species decided to alight on the island. 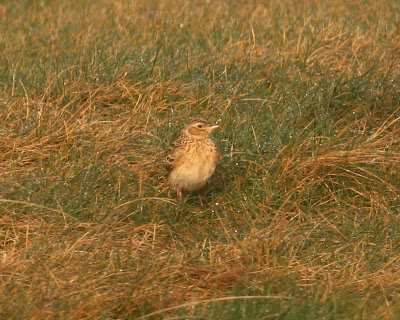 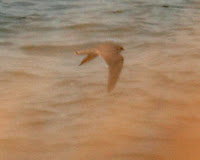 Peregrine and Kestrel were both present and a Merlin (above) gave infrequent glimpses at it flew actively overhead and around the cliffs. 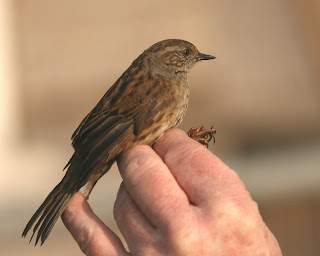 (MSC,ME,CJ,KMc,CJW,SRW) photos CJ
ps:- male and female Shoveler in the east gutter in the afternoon (DB)
Posted by Colin at 13:10