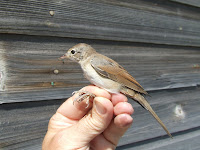 Manx Shearwaters and Gannets were still showing today with 400 and 70 respectively still feeding in the area, also 200 Sandwich Tern and 50 Common Terns although Little Terns were not seen this morning. Two Willow Warblers were on the island and later a single Whitethroat (right) arrived in the trapping area. 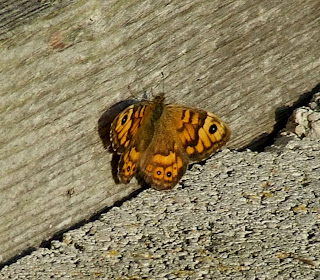 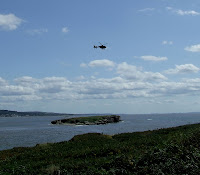 A Wall Brown butterfly (left) was discovered sunning itself, a good find as it is a very scarce insect at Hilbre and declining nationally.
Some puzzlement at high tide when the police helicopter buzzed the island at 100 feet (above right), if there were any villains then they wouldn't be going anywhere !
Ringed :- 5 Meadow Pipits, 2 Willow Warblers, 1 Whitethroat, 1 Wren.
(JE,NDW,PSW,SRW +CD) [487] photos JE
Posted by Colin at 20:25