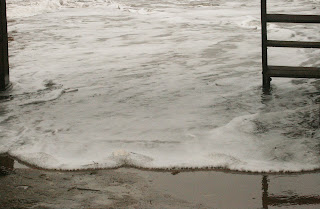 Another good sea watch today on a very high tide, with the sea coming underneath the sea watching hide on occasions (left). Red-throated Divers (below) were as numerous as Great Crested Grebes. Thirty eight Divers were counted but none of the rarer species could be found, but the Velvet Scoter (see 28th January) stayed within good viewing distance off the north end for the whole 3 hour period, although frustratingly never nea 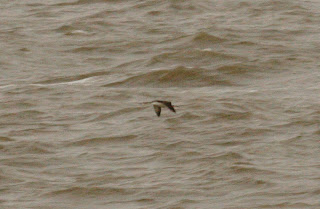 r enough to be photographed. Others on the sea were 6 Red-breasted Mergansers, 10 Common Scoter and very briefly a Harbour Porpoise broke the surface in the telescope field of one observer.
Middle Eye (below) hosted 750 Herring Gulls and a few thousand Oystercatchers while what was left of Little Eye was crowded with Cormorants. Eight Purple Sandpipers were seen after the tide, whilst around the trapping area were the usual Song Thrushes and Blackbirds and best of all a female Blackcap that evaded capture.

I am collating land based sightings of Harbour Porpoise in the inner Liverpool Bay area with a view to writing a bit of a paper in the next couple of years (this is year 3 of 5 of data collection) Would you be good enough to let me know roughly what time you first saw the animal - to the nearest 1/4 hour is sufficient.

Dave - who used to occasionally visit Hilbre on BTCV conservation work parties and as a birder in the 80s- can't remember what we did but we always had fun - happy days.

HI Dave,
Nice to hear from you, I guess the Porpoise was seen at about 12.30hrs,
all the best with your study.
Colin