No new passerines in today so observers concentrated on sea-watching.

Four Shags were roosting on top of cliffs on the way to the hide at the North End and sadly one was found dead. Very poor visibility to start with but cleared as squalls moved through. Sea-watching highlights included 100+ Common Scoter and two drake Velvets. 7 Little Gulls (see right) just before high tide including 2 juveniles and 5 Kittiwakes including a single juvenile. Plenty of birds on the sea with a flock of 20 Goldeneye and another flock of nine Scaup. A Great Northern Diver was found along with 5 Red-throated Divers and around 20 Great Crested Grebes were logged. Two Guillemots were also seen on the sea.


However, the bird of the day was a 'monster' juvenile Glaucous Gull (see below) which appeared from the west (one had been reported from the Point of Air before high tide). It attacked a Greater Black-backed Gull but then got chased off by three other GBBGs. It briefly landed on the rocks between Middle and Hilbre then flew back west. 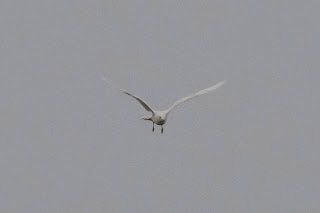 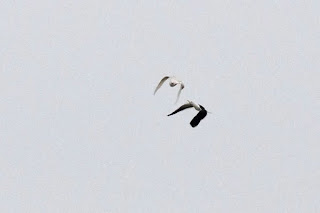 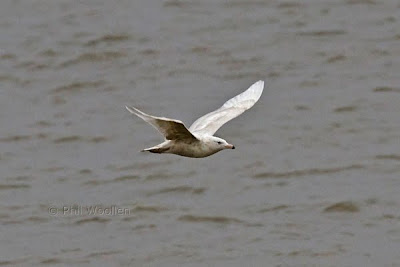 Finally, 21 Purple Sandpipers (see below left) roosted on the rocks above the tide gauge, the best count of the year so far (on a day when twelve were at New Brighton) and three Grey Plovers flew past the hide - a fine day all round for January and continuing the fine start to 2012.