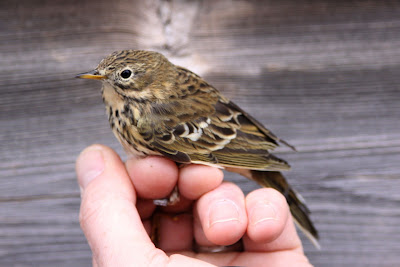 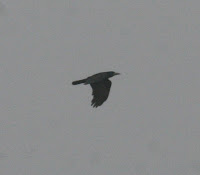 A significant passage of Meadow Pipits today (above) with 230 moving through in small to medium parties helped by the south easterly breeze off the coast. The Merlin was again hunting the shore early but as in the last few days not seen later in the morning. Ten Pied Wagtails went through, also a Grey and a single White Wagtail that was the first of the year. Not too many finches today just 3 Goldfinches, 3 Siskins and a Chaffinch singing on the island but not being trapped for ringing (top left). Three Goldcrests followed the recent small arrivals that are earlier in the month than is normal. A Song Thrush was the first new present since the departure of the wintering birds. Most unexpected bird of the day was probably a Rook that flew south down the island just after mid-day (left). There are still at least 142 pale and 2 dark bellied Brent still on the shore.
Ringed:- 2 Meadow Pipits, 2 Goldcrests, 1 Wren
(BSB,DB,CJ,CJW,PSW et al)         [34-10]       photos CJ (Rook), BSB others
Posted by Colin at 17:34