What an incredible day!  Today saw almost certainly the largest ever fall of migrants recorded at Hilbre since the Bird Observatory was established in 1957.  It soon became obvious to members of the Obs who were staying on the island and those who had made it over before the early tide that there had been a big spring fall of migrants.  Numerous Willow Warblers and a couple of Redstarts were around the paddocks and Wheatears 'bombed' through (with an incredible 72 seen at West Kirby Marine Lake Car Park alone before the tide - see right). 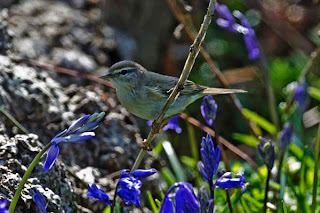 With none of the ringers on due to work commitments an early morning phonecall to the absent secretary resulted in meetings being rearranged and two ringers from the mainland were rallied who upon hearing the news were desperately waiting for the tide to drop and made it to the island by 930am...by which time the members present had already recorded several hundred migrants.  However, the birds continued to push through and by the time the ringers had to depart by early afternoon an incredible 137 birds had been ringed. The majority were Willow Warblers (see left) but the first Grasshopper Warblers of the year were ringed along with a handful of Chiffchaffs, Blackcaps, Redstarts, Sedge Warblers and Wheatears.


Whilst the ringers were busy at work (spending much of their time ringing) - other members were able to record the incredible events with the peak estimate of Willow Warblers being 800 for the day (only four birds were retrapped all day and double figure unringed birds were still present late evening).  The estimate for Wheatears (mainly Greenland) was 200+ and Chiffchaffs were estimated to be c40 with the very impressive supporting cast including 6 Redstarts (see left), at least three singing Grasshopper Warblers (and how many more skulked through unrecorded?), 6 Blackcaps, 2 Whinchats (first of the year), 5 Whitethroats and 5 Sedge Warblers (below right).

Visible migration was also impressive with a massive hirundine passage all day with counts of over 3,000 Swallows, 250 House Martin but only single Sand Martin and five Swifts as well as 140 Goldfinches, but only two Tree Pipits were heard overhead along with single Yellow Wagtail.

Not to be outdone, yesterday's star bird - the Grey Partridge - put in an even better show today and was photographed on the West Side (see left).  Other notable records of a remarkable day were 8 Little Egrets counted in the gutter as the tide receded and a Mediterranean Gull (picked up on call over the East Hoyle).  Waders were also in evidence with 450 Dunlin and 10 Whimbrel (see below) being the pick of the counts.


Coverage remains superb and members are being rewarded for their efforts - with easterly winds forecast for the next week or so will they have time to draw breath after a superb start to May?