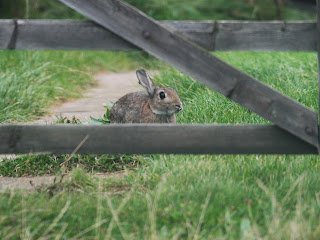 The Rabbit was in the obs garden when members arrived this morning, its been on the island a long time now, and has been christened 'thumper' by one regular (must ask him to explain why, hold on just googled it, thumper was the rabbit in 'Bambi'). All the Goldcrest and Chiffchaffs from yesterday had disappeared in the fresh westerly this morning and the trapping areas were almost desolate. A small passage of Swallows were moving through from the north east and that seemed to be the sum total of migration. A flock of 22 Teal flew south down the east side, likewise 5 Wigeon did the same a short time later. A Rock Pipit was found at the north end and was seen several times during the morning, it is the first record of this autumn period when small numbers are known to pass through the islands. Only 4 Brent were seen, the others would have been elsewhere in the area. Other records today were 13 Scoter, 2 Bar-tailed Godwits,14 Shelduck and a Little Egret.
(CJ et al)
Posted by Colin at 15:51