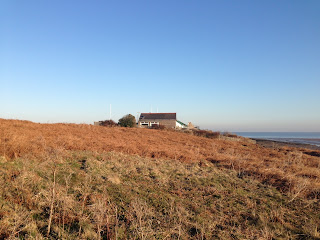 What a difference a day makes... A lovely morning greeted the sole observer this morning with blue skies and a slight frost. A small finch movement was observed including 1-3 each of Siskin, Redpoll, Greenfinch, Chaffinch, 4 Goldfinch and 4 Linnet and Meadow Pipits and Grey, Pied and White Wagtails were on the move.

Two male Reed Buntings spent some time around the paddocks and small parties of Jackdaws passed overhead calling (48 in total). A couple of Woodpigeon passed through including one which was caught and ringed (see photo) the only bird of the day. A single Stock Dove continued the typical March species list as did a single Chiffchaff at the south end which was the first for the year but less expected was a fine male Marsh Harrier (an early record for Hilbre) which meandered east being mobbed by gulls over Little Eye.

A single Little Egret also flew east and a phonecall from the mainland (CLW) alerted the Obs to an unusual raptor which drifted low over West Kirby. It was successfully scoped from the Obs veranda and looked like a Red-tailed Hawk (presumably an escape!!). News was relayed back to mainland thereafter the bird was seen well over Banks Road and the aptly named Hilbre Road.

The final unusual sighting of the day was a brief sighting of a Weasel/Stoat in the SK paddock; a rare sighting on Hilbre but it was too quick to photograph and the tail was not seen well. Maybe it will be seen again tomorrow.
(SRW)              photos SRW    [ 20-9 ]