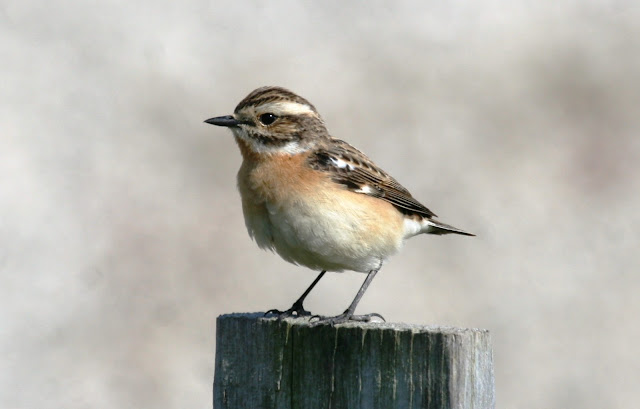 Whinchat
For once a good weather bank holiday with favourable winds for migrant arrivals at Hilbre. About a dozen Wheatears were passing through early on and a few more landed later together with the first Whinchat for Hilbre this spring. There was not a massive amount of migrants but a slow quality trickle in during the morning of 8 Willow Warblers, 2 Sedge Warblers, a Tree Pipit, 3 White Wagtails and a Grasshopper Warbler. Lesser Redpolls and Goldfinches also came through but not in huge numbers, Swallows numbered about 275 (mainly during the afternoon), five House Martins moved through mid-afternoon and a group of three Swifts arrived from the west during the morning and continued towards Wirral.﻿﻿ ﻿
﻿
Some of the best records of today surprisingly came from the sea and shore, not least of which was a Harbour Porpoise that headed steadfastly down the Dee in full view of the members. A sudden commotion amongst the gulls at the north end heralded the arrival of a Bonxie (presumably the same bird as yesterday) that continued south west down the west side for all to see from the Obs garden. Previously 12 Manx Shearwaters were off to the north west and Sandwich Terns and Gannets seemed to be diving everywhere. Other seabirds today included 8 Guillemots, 45 Common Scoter (including the drake that is now semi-resident).
﻿﻿﻿﻿﻿﻿ ﻿﻿﻿﻿﻿﻿﻿﻿﻿﻿﻿﻿﻿﻿﻿ ﻿﻿﻿ ﻿﻿
﻿﻿﻿﻿﻿﻿﻿﻿On the shore a Common Sandpiper stayed for quite a while, likewise the 12 Whimbrel and the 2,000 or so Dunlin which have become a feature recently. The pair of Canada geese of the last few days also showed again and 2 Little Egrets fed around the Middle Eye area. 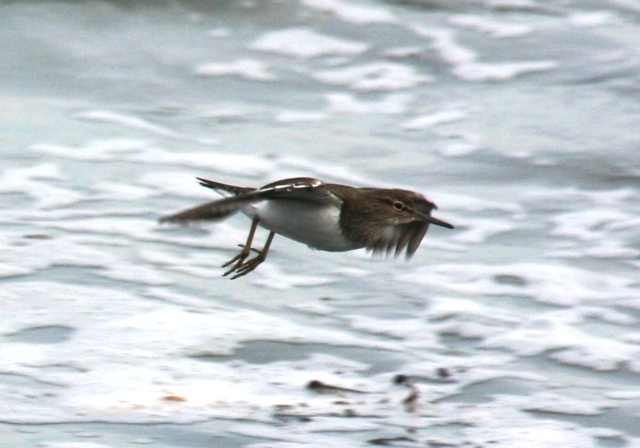