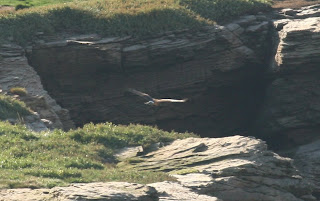 A calm and sunny morning became even more pleasant as SRW opened the obs living room curtains and was greeted by a close fly past by a ringtail Hen Harrier (distant photo CJ), the bird flying off the south end and then low over middle. 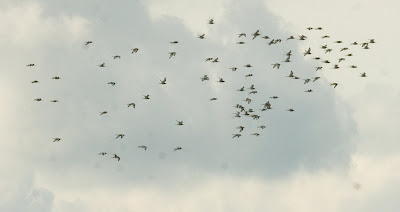 Over 3,000 terns were estimated on the west hoyle bank including a good count of 110 Little Terns. Late morning saw a passage of over 100 House Martins in a loose flock going south passed the obs, and also 2 flocks of Black-tailed Godwits totaling 122 heading west high between the islands (photo by SRW). Click photos to enlarge
(JE,CJ,DNW,PGW,SRW,TGW)
Posted by Colin at 14:33