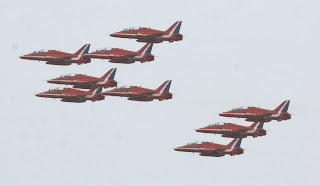 With not many birds around today's highlight was the Red Arrows (see opposite) from Hoylake Lifeboat Day!! Views from the island were superb - although the local waders and terns seemed less impressed.

However, there was still a Little Egret in the gutter and at least 4 Arctic Skuas were seen including 2 on the East Hoyle harrassing the terns and gulls. Passerines included a couple of Wheatears in Fisherman's Cove (Middle Island) and a rather late very young Linnet was trapped.