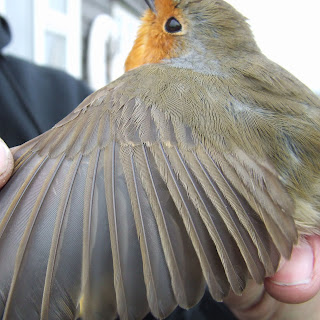 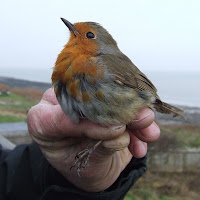 Still only small numbers of passerines on the island, including 3 Song Thrushes, 2 Blackbirds, 4 Wrens and a Robin that was ringed as a juvenile last August and has been present since. Even if its history was unknown ringers could easily age it by the two generations of greater coverts (see above), and other clues inside the upper mandible and the tail. Four Meadow Pipits only were noted but it will not be long before we see an increase in these birds as the spring passage of Meadow Pipits on Hilbre normally begins in the middle of March. 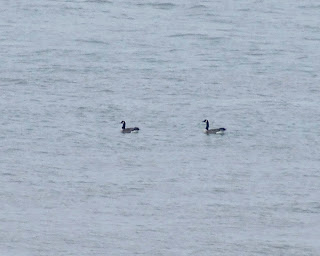 The Red-breasted Merganser is still off shore together with small numbers of the regular waders and of course the Brents, but 2 Canada Geese (right) on the sea were less expected visitors.
(JE,CJW,DW,RW) Photos JE
Posted by Colin at 10:56