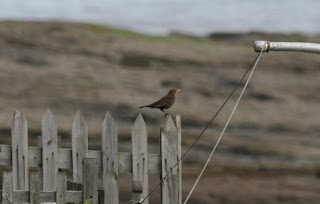 A light east north east breeze and bright blue skies made for a pleasant morning on the island, but as always at this time of year birds were thin on the ground although a few surprises turned up.

The first of these was a female Blackbird (ringed on its left leg - see left) which appeared first on the Obs garden fence before later being seen around the east side and on top of the SK trap. Blackbird has not been seen on the island for several weeks ... unfortunately it was not caught. 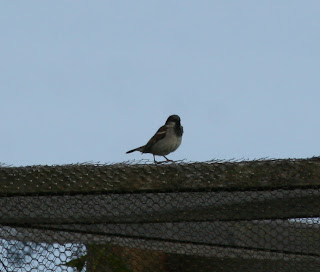 Following this a House Sparrow was heard and soon a male was discovered sitting on the Old Obs fence (a favourite spot for sparrows on Hilbre). It soon did a tour of the island but did not stop long enough to be caught although it frustrated the ringers by landing momentarily on the 'Heli' trap (see right).

Up to four Grey Herons and three Little Egrets fed in the gutter on the incoming and outgoing tide and a flock of 26 Canada Geese alighted on the shore below the Obs before heading out to sea and alighting again this time on the sea - a most unusual sight (see below)! 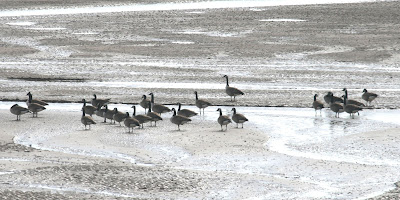 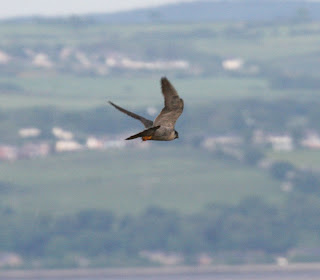 More Ringed Plover (70) and Dunlin (50) passed through but few other waders could be found apart from a few Oystercatchers. A male Kestrel was seen hunting around the island during the mornig and a Peregrine sat on its usual perch on the reef first thing (see left).

The day ended quietly but with the usual high hopes and anticipation with the wind turning to the south east...