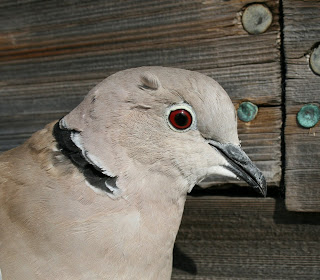 morning. First impressions were not encouraging and 2 Wheatears and a single Willow Warbler were all that was to be found. During the morning things improved as a Grasshopper Warbler was heard singing in the bottom of the obs garden, but was never seen then or later. A Collared Dove (right) was trapped in the SK heli, and later another which was not associating with it was also caught. One of the 2 Greenland Wheatears was then trapped which is a much better than average hit rate of 50%, and by mid-morning a Whitethroat which had not been seen previously 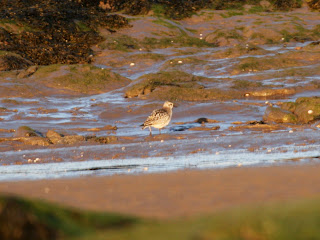 appeared in the old 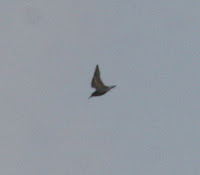 obs net. Swallows arrived in moderate numbers but no martins or swifts were with them.
A Grey Plover (left) was on the ridge south of middle, and towards noon its near cousin the Golden Plover flew north off to the west of the island (record shot, above right). A Little Egret (below) spent all morning within sight of the 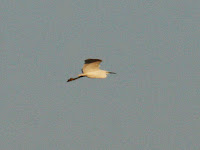 observers, and Whimbrel seemed to be in lower numbers than last week, 11 being counted today. Not much time allocated to sea-watching, 2 Sandwich Terns being the only decent record.
Ringed:- 2 Collared Doves, 1 Whitethroat, 1 Greenland Wheatear, 1 Meadow Pipit, 1 Wren.
(BSB,CJ,KMc,DCT,PT,NDW) [243] photos CJ
Posted by Colin at 14:23