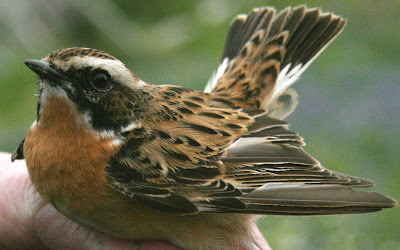 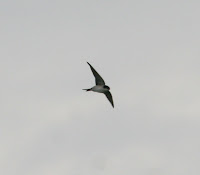 A visitor could imagine that the dull and windy morning could be in late autumn, but a look at the species list would tell regular birders that we are in the peak of spring migration. The main feature soon after dawn was the extensive passage of Swallows numbering at least 300 keeping low to the east side and across the shore, and later not to be outdone up to 30 House 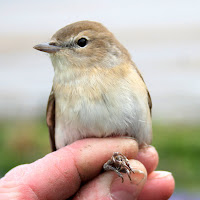 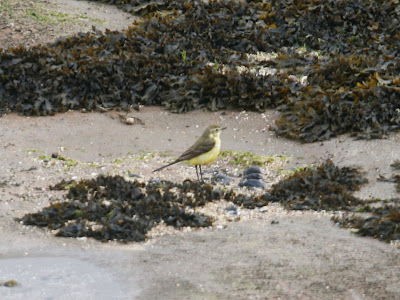 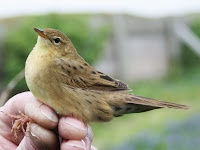 records in the last few days. Swifts went through in small groups totalling 25 birds and 4 Sand Martins were also logged. Bird of the day was caught very early in the SK trap - a Whinchat, the first ringed this year (top right). No large numbers of Willow Warblers, just 6 today but quality birds continued to be found during the morning :- 2 Whitethroats, continuing the good numbers this spring, a yellow morph Grasshopper 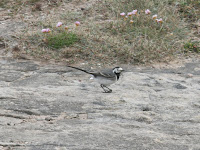 Warbler (right), the second Garden Warbler this year (above right), and a Sedge Warbler. It was a good day for Yellow Wagtail (above) with at least 12 over, a pair and then a group of 4 alighting near the north 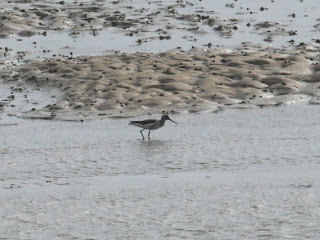 end to give a rare photo opportunity. One or 2 alba wagtails were also on the ground (right). Tree Pipits also returned to form as well as the wagtails and 6 were noted today, a few Meadow Pipits also seemed to be moving. Only a single Wheatear today, while finches were only represented by 2 Chaffinches and 3 Goldfinches. A Greenshank was found feeding in the east gutter (above), we have been short of scarce waders recently and it was a pleasing addition to the 14 Whimbrel on the shore. Not much sea watching done but 12 Common Terns were off the north end. 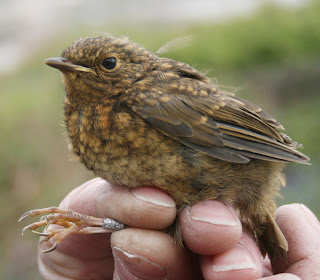 The first bird to be hatched this year on the island (as far as we can be sure) was a juvenile Robin that was ringed today (right).
Ringed :-5 Willow Warblers, 2 Whitethroats, 1 Whinchat, 1 Garden Warbler, 1 Grasshopper Warbler, 1 Sedge Warbler, 1 Meadow Pipit, 1 Robin. (DB,CJ,ME+HW,DCT,PT,NDW,CJW) [525-36] photos CJ
Posted by Colin at 12:19

Looks like you had a good day. We caught our first juvenile Robin yesterday and two more today.