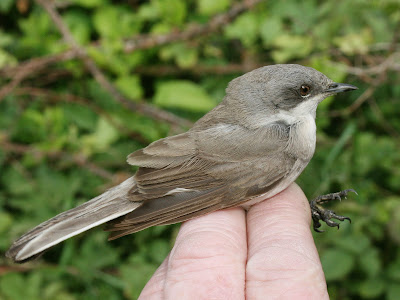 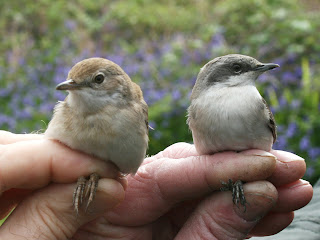 Some rain showers overnight did not bring the hoped for fall and little was to be seen apart from a Willow Warbler or two. Swallows were going through all morning in many hundreds with 2,000 estimated by 10.30hrs, also about a dozen Swifts and 60 House Martins. Not as many Yellow Wagtails as yesterday but 6 were heard and a few alba wagtails were at the north end. The morning seemed to get better as the sun tried to break through, especially when a Lesser Whitethroat started singing in the rangers garden. This was the first Lesser Whitethroat for the year (above) and it was trapped in the 'heli' very shortly after and minutes later a Common Whitethroat was also caught enabling a 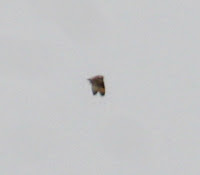 comparison photo to be taken (above right). These warblers had undoubtedly just arrived and later 3 Whitethroats and 2 Sedge Warblers were recorded. A Short-eared Owl was seen distantly over the sea being mobbed as it flew east across the north end and along the north Wirral shore (right). Just before 11.00hrs 2 Common Sandpipers were around the north end rocks, and although regular in spring these are the first since one in March. Also on the shore were 21 Whimbrel and 8 Curlew, 1,200 Dunlin, 3 Little Egrets, a Tufted Duck and 2 Canada Geese flew east across between Little Eye and the mainland. Ringed:-6 Willow Warblers, 1 Lesser Whitethroat, 3 Common Whitethroat, 1 Goldfinch.(BSB,DB,JE,ME+HW,CJ,DCT,PT,NDW,CJW, et al) [536-37] photos CJ - blog updated at 17.20
Posted by Colin at 11:35