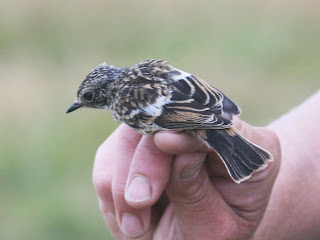 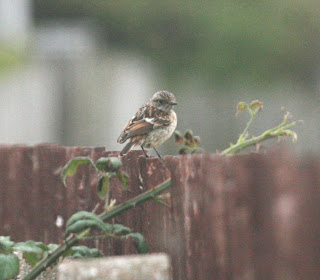 It's incredible what a light easterly with cloud and the merest 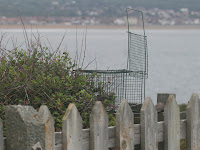 hint of drizzle can do even this early in the autumn. Willow Warblers dropped in at regular intervals all morning, with an estimated 35 having arrived by early afternoon. A juvenile Stonechat (above), possibly the bird that has been around on some days over the last week or so, appeared on the paddock 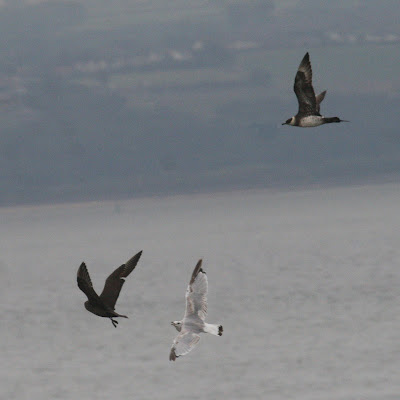 fences and it took an 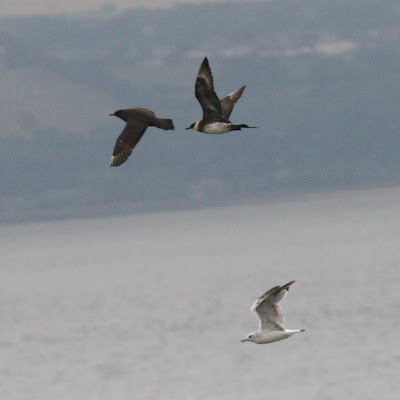 inspired placement of the potter traps (above right), jammed between the obs fence and the hedge, to capture it in less than 10 minutes. Just before noon a Grasshopper Warbler flew in from the sea near 'buzzard hill' and then buried itself in the thicket in the old obs garden and was later caught

in the mist net. A Whitethroat was also a late arrival on the island but managed to evade capture. There was not much time for sea-watching, but at one stage the sea came to the observers when pale and dark Arctic Skuas harassed a moulting first summer Kittiwake practically over 'Wheatear hill' to the west of the obs (above). Up to a hundred Swallows went through but only 4 Swifts were seen when the day brightened. A Common Sandpiper (right) was found on the

rocks on the west side, while there are still 4 Whimbrel about the islands. On a depressing note a dead Fulmar floated in to the north end with fishing line down its throat (left), no comment is necessary. Much more likely to lift the spirit was

the Rabbit when it made a brief scuttling appearance through the SK paddock, finally satisfying the last of the regulars who had not yet 'ticked' it ! Ringed:- 18 Willow Warblers, 4 Linnets, 2 Wrens, 1 Stonechat, 1 Grasshopper warbler (right), 1 Dunnock. (DB,CJ) [664-39?] photos CJ