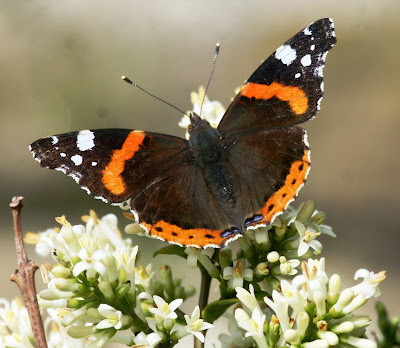 A quiet day was brightened up by the continued build up of Sandwich Terns with 218 counted including many juveniles and several displaying pairs.... video below is taken with an iPhone through a telescope (i.e. experimental!).

Other birds today included a single juvenile Linnet caught and ringed, a single Whimbrel over in company with its more numerous cousin the Curlew, which continue to build up in number.

A single Sand Martin passed over continuing the recent run of mid-summer records of this species (which is unusual at Hilbre). An influx of Red Admiral butterflies (15 were noted - see above) and Green-veined Whites appeared in small numbers too.