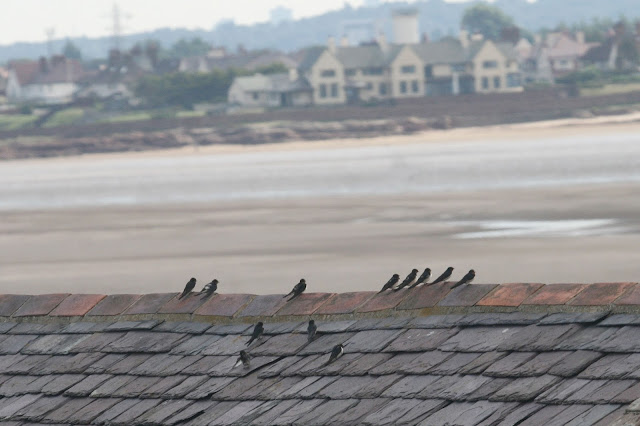 After the unfriendly weather of the last 3 days, a pleasent morning  to be on the island. At least 6 Willow Warblers were present (when trapped one proved to be a bird from 5 days ago). A light passage of 87 Swallows saw some resting on the bunkhouse roof momentarily (above), but there were no other migrants, except for a single Pied Wagtail. Two Arctic Skuas flew south west down the west side, one of which was a well marked pale phase that looked stunningly black and white in flight, 3 others were noted later. Butterflies thrived in the sunshine early in the day, with many Peacock and Grayling in their prefered habitat, while the overnight moth trap (in addition to moths) unexpectedly produced the large burying beetle necrophorus investigator.
Ringed:- 4 Willow Warblers, 1 Blackbird      [ 514-30 ]
(BSB,AAB+2,DB,CJ,KMC+SD,CJW+4,RTW)  photos CJ
Posted by Colin at 22:35