Sunday was WeBs count day so it was a leisurely start as the high tide wasn’t until 14.20. Arriving on the island in plenty of time it soon became clear there were very few passerines about apart from the usual residents. A Song Thrush was seen but is probably the same bird that has been recorded on other dates recently. A ringed Rock Pipit was seen at the north end. 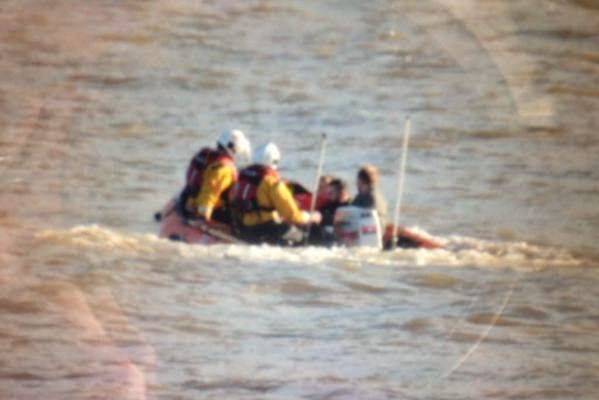 As the tide flooded two couples tried to cross from Hilbre to Middle Eye and in the process fell over and got soaking wet. The coastguard was informed and they also received a 999 call from the people concerned as they were stranded on Middle Eye. As a result the West Kirby inshore lifeboat was launched and made two trips to ferry the stranded trippers back to West Kirby marine lake (right).


Once this excitement was over it was back to the WeBs count. The sea was disappointingly quiet with only single Guillemot and Red-throated Diver and two Great-crested grebes being seen.  A male Common Scoter came quite close inshore along the east side but the highlight was a party of 4 Goldeneye – probably displaced from the marine lake by the sailing regatta – followed by a single female just after the high tide.

Before the high tide 8 Purple Sandpipers were seen feeding at the north end. 4 were found roosting on the island with 3 on the west side and one in Niffy Bay. There were good numbers of Redshank and Turnstone roosting in Niffy Bay. One of the Redshank wore a metal ring on its right leg and one of the Turnstone’s was a colour ringed bird from 2010. Once the tide started to recede 7 Purple Sandpipers were found feeding again at the north end so the others must have roosted either on Middle Eye or somewhere inaccessible on Hilbre. A flock of 23 Ringed Plover saw out the high tide on the west side.