Cormorants at Hilbre and in the Dee Estuary

Recent years have seen the Obs notice larger and larger numbers of Cormorants leaving the estuary at dawn with recent counts eclipsing previous records (see blogs for 19th and 20th January 2015 with record counts of 3,336 and 3,884 respectively obtained by Obs regular DB).

In fact they've also been observed in the evenings (including from the mainland, AAB et al) but not quite on the same scale; perhaps they fly into the estuary on a broader front than they leave the estuary in the mornings?  We will continue to monitor the situation in order to answer this and other questions.

We recently pondered on the blog exactly where they were coming from and a discussion between our Secretary and the RSPB Site Manager for the Dee Estuary (Colin E Wells) prompted this response from Colin:

"I was interested to read HiBO’s reports of large numbers of Cormorants leaving the estuary at dawn, this ties in with recent counts I have carried out from Parkgate and the discovery of the night time roost site on the edge of the saltmarsh at Burton (Dee Estuary RSPB Reserve). Over the last couple of years whilst carrying out the Hen Harrier roost survey at Parkgate I have observed flocks of Cormorants flying up stream at dusk, about 2 km out following the edge of the outer saltmarsh and often wondered where they were roosting. Day time high tide WeBS counts have shown that Cormorants are increasing in the North West and internationally important numbers occur on the estuary.

On 16th December 2014, Dan Trotman and I were carrying out the WeBS low water count off Burton Marsh when we came across a large area of white washed pioneer saltmarsh which smelt very strongly of what I can only describe as a fish market on a hot day! Tell tale signs of black feathers suggested that this is the site of a massive Cormorant roost. One late afternoon I located a vantage point along Well Lane, Ness and I was able to see a huge black mass of Cormorants in the fading light at the roost location.

Since then I have carried out counts from Parkgate, birds noted to fly upstream about two hours before dusk, counts as follows: 1,100 on 29th Dec, 1,400 on 2nd Jan, 1,700 on 10th Jan and 2,000 on 18th Jan. It is possible that a lot of birds are missed due to the distance involved and poor light conditions, I have noted that birds are still coming in when it is virtually dark. These circumstances could account for the discrepancy between my counts & HiBO’s.

As far as I’m aware the Hilbre count of 3,884 is an all time record for the UK, the previous record being from the Ribble.

One would presume that these birds are the same as the one’s I’ve counted from Parkgate and are roosting at Burton. From my research, it appears that the Dee Estuary has one of the largest night time roosts of cormorants in the UK. The big question is "where are they feeding and how far are they travelling to the roost from within Liverpool Bay?”  So hopefully I have answered your question where they are roosting!"

Many thanks to Colin for sharing this news with us, so now we know where many of Hilbre's early morning Cormorants that follow a very distinct flight-line have been roosting overnight. Now that it has been found it will be fascinating to correlate our counts with those further up the Dee at the massive roost site.

For interest the chart below indicates the maximum counts each year of Cormorants at Hilbre since the formation of Hilbre Bird Observatory in 1957. 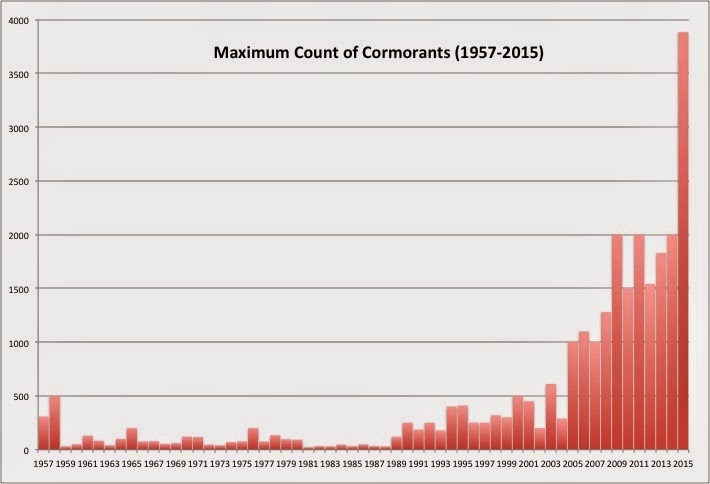