The regular Merlin showed several times during the morning, and another was seen to be chased off to Wales by a Herring Gull. Two Little Egrets were present before the tide and a single after the tide, when the Brent assembled between the islands enabling a record count (this year) of 89 to be made. The build-up of Brent has been very early this winter and has raised hopes of a bumper total by the end of the year. Purple Sandpipers have increased to four at the north end after the tide. 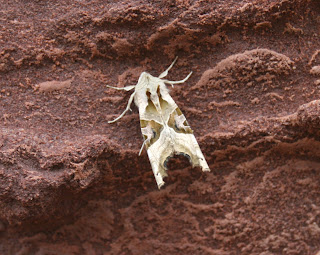 A quiet day on the sea (a single Red-throated Diver and a few G C Grebes, Guillemot (above) etc) also a quiet day for migrants (4 Robins and a Blackbird). Flocks of Starlings totaling over 300 passed across the shore by Little Eye before the tide and 13 Crows found something to eat on the shore. A late Angle Shades moth (right) rested on the cliff face by the roadway onto the island.
(DB,CJ,AW & friends, also visitor CS) Both photos CJ
Posted by Colin at 15:59