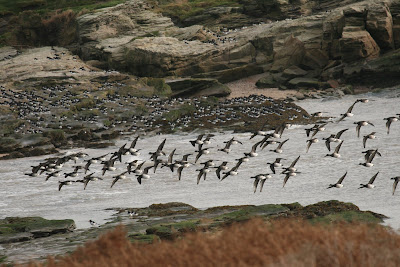 Woolly hats were the order of the day with a strong northeasterly over the tide. Unlike yesterday no other geese species except the Brent which are now at 94 (right).

Repeat performances from the recent Merlin and Great Northern Diver, although seawatching added 3 Red-throated Divers, about 320 Sanderling and a few Wigeon (below) plus the usual winter species. 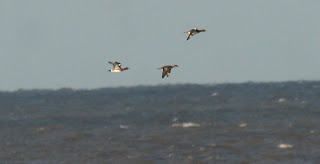 Odd starlings went east off the north end, and larger numbers west between the islands.
On the ground the Black Redstart could not be found and only single Blackbird, Redwing and Rock Pipit were new today.
One of the 2 Peregrines carried away its catch (any guesses?) from the scavenging Herring Gulls.

PS Forgot to mention the weasel that showed in the new obs garden this morning, it maybe the one that was seen earlier in the autumn.
(DB,CJ,PGW) All photos CJ
Posted by Colin at 14:55

Is it a Redshank?