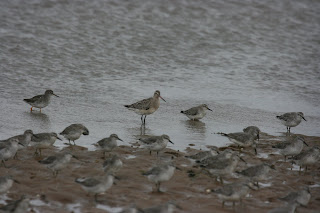 With the wind dropping and shifting to the south west, observers weren't too optimistic. However, the sound of a Goldcrest calling in the Obs garden greeted the late crew. As many as 15 were noted on the island including several caught and ringed.

Another Merlin was found on the East Hoyle bank and then flew over the island harrassing the smaller waders at the North End before flying off north. Good numbers of Bar-tailed Godwit (c100) and Knot (c500) were on the East Hoyle as the tide flooded (see photo).

Four Pale-bellied Brents were present on the 'Whaleback' and another five were on the slipway and the two groups joined together creating a nice flock of 9 (including 3 juvs) swimming in the east side gutter as the tide flooded...winter is on its way (see photo). 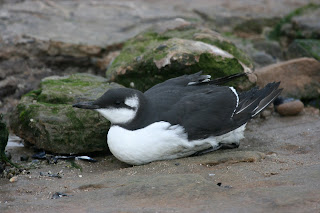 A male Stonechat arrived just before observers left the island as the tide flooded.
The sea was fairly quiet but this wind blown exhausted Guillemot was found sheltering on the landrover track (see photo).