The Paddyfield Warbler showed briefly at 11.40hrs on the cliff edge of the lower paddock, and then again at several places around the area at 13.00hrs, although attempts at photography of such a secretive and elusive beast were frustrating in the extreme (see below, spot the warbler!). It was re-trapped in the SK paddock at 13.30 hrs; finally proving that it is still present and now in its fifth day on the island (at least!). Interestingly it has put on 0.6 gram in this time and is therefore happily finding enough food to sustain it. 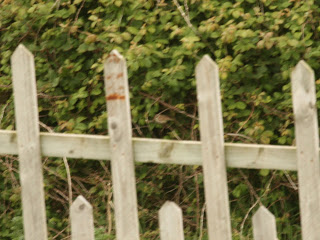 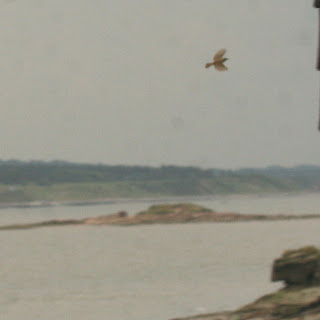 It was still present at 8pm when it showed briefly but well to the one intrepid birder who had ventured to the island. Visitors please view only from the 'air raid shelter' and do not enter the fenced off areas.

Other news today is of a female Eider (below), a 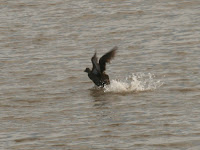 Fulmar over the island, 2 Whimbrel, a Bar-tailed Godwit (below) at the north end with some Knot and Oystercatchers and a 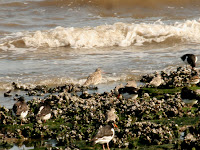 Peregrine failing to catch a small wader.
Six Gannets were on the sea and a Small Copper butterfly was present with 2 Painted Ladies.