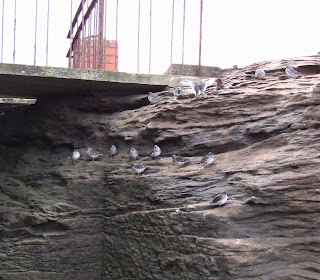 There was a gentle breeze from the south so we expected a gentle wader roosting day. We were not wrong. Fourteen Purple Sandpipers roosted at the north end for the whole high tide period (right); and the Turnstones were there after the tide waiting for the rocks to clear. The middle island was full of Oystercatchers, 6000 between there and the south of the main island, but there were only 3 or 4 Curlews, there was no big flock roosting on middle.The picture below is of the middle island when the Short-eared Owl turned up. The owl showed again after the tide (below right) 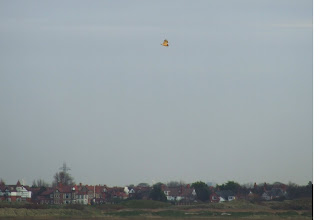 Some sea watching took place and was very good. Three hundred Cormorants and 200 Great-crested Grebes feeding off the north end meant that there was always something going on. There were 25 Red-throated Divers, it must be winter despite the mild weather, and 30 Common Scoters. Three Razorbills and 2 Guillemots were a bonus and there was a complete selection of gulls(BH, LBB, GBB, H and Common). Later a Bonxie appeared as a reward for persistence.

Also noted today were over 100 Brents, Pale and Dark, and a selection of passerines from Crows through 4 Blackbirds to Robins, Dunnocks and Wrens.
(DB,JE,MGT)      photos JE
Posted by Colin at 12:27