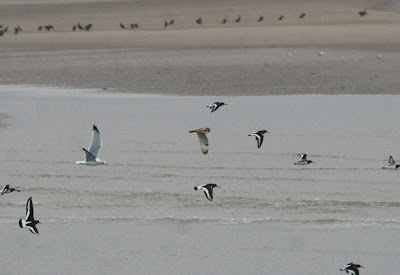 Much lighter winds today but still from the south east overnight, made for typical November records with passage of a Brambling with the several Chaffinches, 3 Lesser Redpolls and later many Goldfinches, some of which dropped in to the obs garden to take advantage of the feeders (below left). After hundreds of Starlings in recent days, none today, but 15 Skylarks went through including a group of ten. On the ground a male Blackcap and a Goldcrest were ringed, also a Song Thrush, while 5 Blackbirds included 4 new birds passing through together during the afternoon. Early in the morning a Merlin again moved around the island and slightly later a Short-eared Owl was disturbed from Niffy bay and was mobbed by the shorebirds as it moved off east (above and right), it later returned to the island as the tide flooded in the afternoon. Following on from the very late 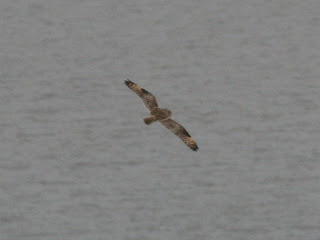 Common Tern seen a week ago, an equally surprising record today of a Sandwich tern found hanging around on the east hoyle tide edge! Five Purple Sandpipers were the most seen so far this season, and 60 Bar-tailed Godwits and 50 Redshanks remain on the shore. Seven Wigeon 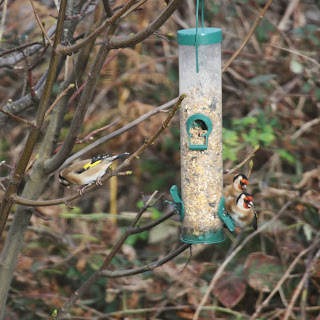 early in the day and 300 Common Scoters off to the north were the only duck, but more interesting were the 2 Dark-bellied birds noted amongst the Brent Geese. Two Little Egrets included the colour ringed bird seen yesterday. Quite a few Great Crested Grebes were visible on the calm sea together with 2 Red-throated Divers and a couple of Guillemots. Not to be outdone by the Sandwich tern, the insect world produced a Painted Lady butterfly flying about the obs garden, the only butterfly of the day and another exceptionally late record. This has been a very poor year for this species at Hilbre and the number logged could be counted on one hand. Ringed:- 3 Goldfinches,1 Blackcap, 1 Goldcrest, 1 Song Thrush (DB,CJ,KMc,CJW,PSW, et al) [953-46] photos CJ
Posted by Colin at 22:04