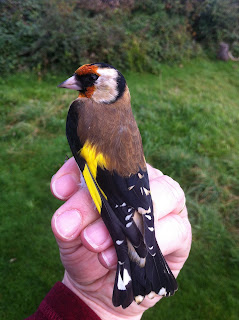 With the wind dropping overnight observers were slightly more optimistic than recently, but rain during the night and the wind still just west of south meant that migrants were hard to find.
However, a Chiffchaff was new in and a late Yellow Wagtail was seen along with a small passage of Meadow Pipits, a couple of Alba Wagtails and a few Goldfinches one of which was trapped and ringed (left).

As the tide flooded 52 Pale-bellied Brents were counted between the islands (all adults and none with colour-rings - presumably there were more elsewhere?) A call from the Dee Estuary Voluntary Wardens at West Kirby beach at high tide resolved the issue as at least 92 Brents appeared just off Little Eye (counted from the Obs).
A Sandwich Tern called and flew past the Obs just before high tide and a Whimbrel was heard amongst numerous other waders mainly roosting on the undisturbed Middle Eye.
A Rock Pipit remained elusive around the main island. Hirundines moved through as the tide reached its peak with 12 Swallows and 3 House Martins seen.
Ringed:- 1 Goldfinch [ 983-30 ]
(DB et al)