Colour-ringed birds from East, West and closer to home 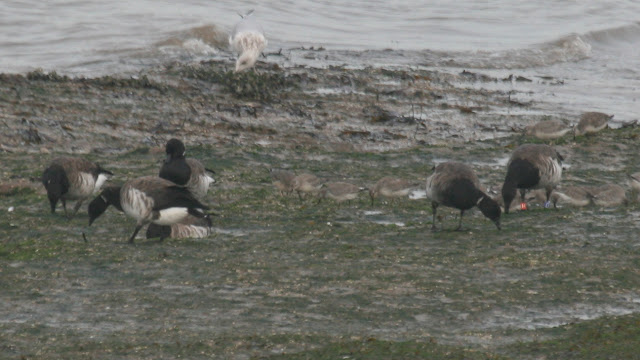 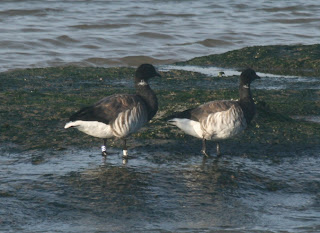 With the early arrival and increase in number of Pale-bellied Brent Geese (up to 148 have been counted already and we are not half way through October yet!), we have already seen the return of two colour-ringed birds from previous winters.  The famous "HDRB" (see above right on the 'whaleback') was ringed on Axel Heiberg island (Arctic Canada) on 2nd August 2007 and he first arrived at Hilbre on 24th December 2008 and has been returning each winter since.

A second colour-ringed bird ("HSWB") was ringed at Dungarvan Harbour (Northern Ireland) on 18th December 2008 and first appeared around Hilbre on 12th November 2010.  He returned to the island soon after HDRB this autumn.  Perhaps more birds will follow this winter.  Thanks to the Irish Brent Goose Research Group (www.irishbrentgoose.org) for information about these birds.

Waders have been arriving back since August including one of our Turnstones colour-ringed in the winter of 2007/08 on Hilbre and possibly the bird seen on passage in Iceland in spring 2008. 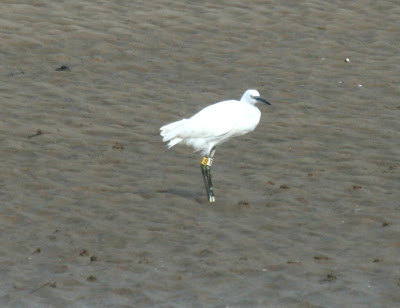 A Little Egret seen on Tuesday and Wednesday 9th and 10th October 2012 (see right) was colour-ringed and had similar sequences from those seen previously at Hilbre (eg see blog entry for 3rd January 2011) that have been ringed along the North Wales coast as chicks.  We have just received news back that this bird was ringed as the eldest of a brood of two on 25th June 2012 at Penrhyn (Bangor).  Thanks to Tony Cross for the information (http://midwalesringers.blogspot.com).
Finally, Wirral Ranger Matt Thomas, of "From the muddy banks of the dee" Dee birder blog fame (http://deebirder.blogspot.co.uk/) spotted a colour-ringed Black-headed Gull at West Kirby Marine Lake pontoons last Sunday but he could not quite read the lettering.  Just before a trip to Hilbre on Wednesday 10th October 2012 he managed to get a photo (see below).  Matt has since found out that this bird was ringed at Stavanger in Norway on 10th July this year - it had been caught by hand with a food lure and Matt's sighting is the first sighting since it was ringed in Norway. 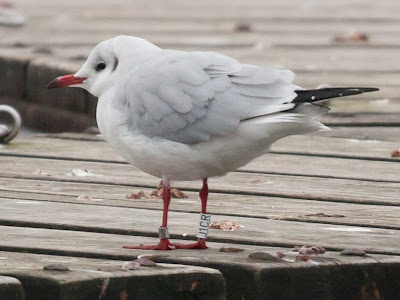