Spring arrived properly at last with the first notable arrival of migrants occurring today in a light easterly wind (dropping to almost flat calm mid morning) with mist early on.

Goldcrests and Chiffchaffs could be heard at dawn and at least 26 of the former and 9 of the latter were recorded during the day.  The first two Willow Warblers of the year were caught along with two Blackcaps (see right) of the three present on the island.

Thrushes were much in evidence with at least 20 Blackbirds counted (and several ringed), plus 70 Redwing over (and unusually four birds caught and ringed - see below left), 16 Fieldfare but no hoped for Ring Ouzel (despite at least six recorded on North Wirral during the day). 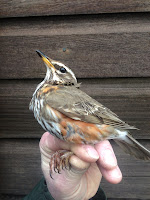 Other visible migration included c750 Meadow Pipits passing over and the first two Tree Pipits buzzing southwards over the island (many migrants pass south over Hilbre in spring contrary to expectation).  Finches also passed through with small numbers of Chaffinch, Greenfinch, Linnet, Goldfinch, Siskin and Redpoll noted plus a male Reed Bunting.  26 Wheatears indicated that these are now rushing through after being initially delayed this Spring.

The first Sand Martins (35) and a single House Martin flew through along with  19 Swallows. 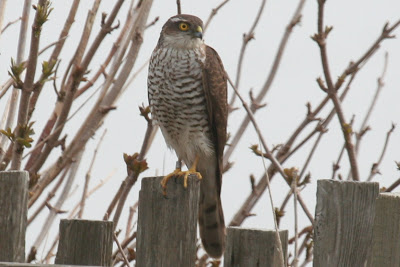 An immature Sparrowhawk appeared on the Obs east gate and was photographed (see above) frustratingly revealing it was ringed (see right leg). Unfortunately, it evaded capture but a day-total of 53 birds ringed made it the best day of the Spring so far for ringing.