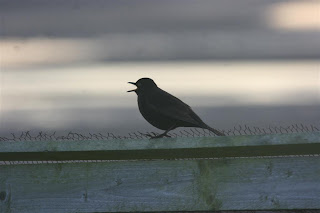 Expectations were high with the wind a biting north-easterly and birds flooding into the East Coast... but sadly visibility was too good. However, a small number of birds arrived or moved through.

A fall of Blackbirds (at least 10) on the islands from first light (see photo) included two birds caught and ringed. A couple of Goldcrests were present and there was some movement overhead with Snipe, Skylark and Meadow Pipits (c30) seen. The highlight was a Snow Bunting heard flying over the island. 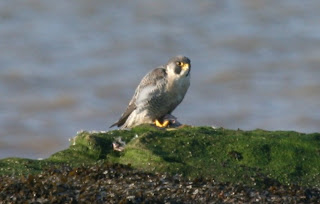 At least two Peregrines were around again mainly on the ridge between Middle and Little Eye as usual (see photo).

The Pale-bellied Brent Goose flock had temporarily reduced to 64, but did include 22 juveniles - the sign of a good breeding season perhaps?