The day started nicely enough with a light south-easterly promising more than it delivered. An 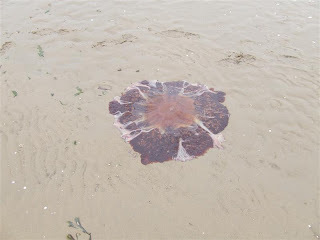 early morning sea-watch produced a dark phase Arctic Skua (after three were seen on last night's tide along with lots of Gannets). A few passage waders were still in evidence to observers following the tide back with a few Dunlin, Ringed Plovers and Curlew seen. The last few days have seen more jellyfish washed up including many Lion's Manes (see right).

Breeding birds were again in evidence with the female Mallard making a rare appearance and a rather advanced juvenile Shelduck with adults in the gutter. Four Grey Herons and three Little Egrets were feeding on the edge of the ebbing tide.

A single Swift provided evidence of some migration but this was soon quashed when the forecast rain arrived on queue at 10am and was clearly 'set in' for the day. However, the highlights of the day, other than the earlier skua, were a female Goosander in the east gutter and the immature drake Eider was off the North End over the tide (see left).