The day began with a south-easterly influence but the promised 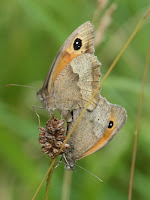 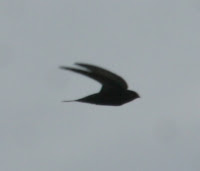 heat wave was slow to materialise.. Dark rain leaden clouds passed over during the morning and the very occasional spot of rain brought a passage of at least 25 Swifts (left) and more unusually 4 Sand Martins. Three Little Egrets fed in the gutter and the low tide encouraged the mid summer build up of Lesser Black-backed Gulls with 165 counted. A morning sea-watch was livened up with the lovely sight of a pod of ten Bottle-nosed Dolphins that moved slowly westwards. Other mammal sightings included a brief view of the Rabbit. As well as the mammals, insects were much in evidence including several species of butterflies (including Meadow Browns - above right) and a couple of species of damselflies. 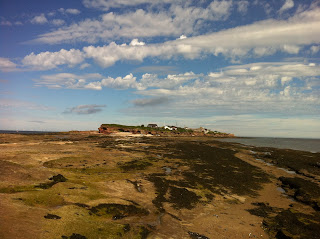 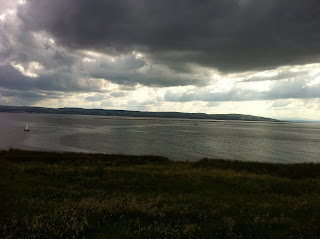 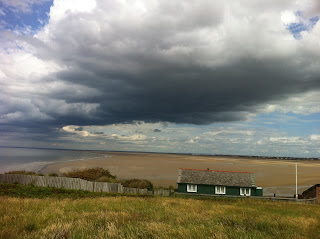 een throughout the day but other waders were thin on the ground until a Greenshank was heard from the Obs balcony. The resident Shelduck flock has reduced in number to just over twenty birds but a separate flock of 35 were seen heading high north west out of the estuary late morning. 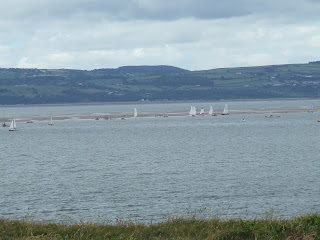 By lunchtime it was a beautiful day weather wise with dark clouds passing over (see above left and right) between bright blue skies (above centre) and rising temperatures (see below) no doubt making it a memorable Regatta for Hoylake Sailing Club's race day and annual visit to the West Hoyle Sandbank (right). By mid afternoon the temperature had risen dramatically, especially with the wind dropping, this produced a brief possible sighting of a Hummingbird Hawk Moth 'whizzing' through the Old Obs garden mid afternoon which was later confirmed in the early evening when one was found in the Obs garden ('Southward') near the Honeysuckle. A fine way to end a lovely June day on Hilbre.