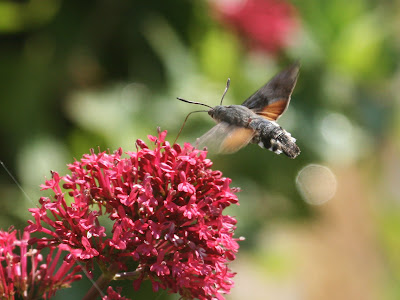 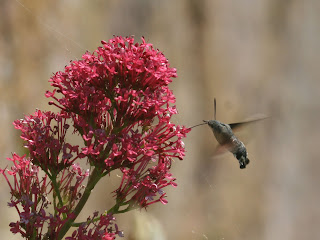 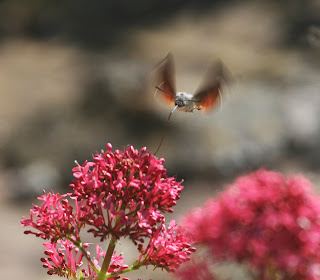 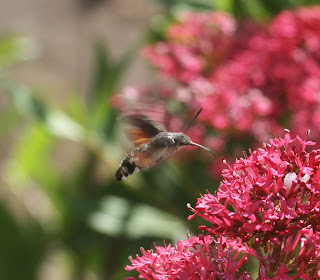 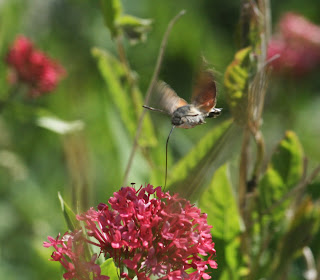 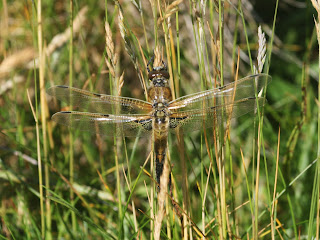 A beautiful warm and sunny day with very little or no breeze put insects in the spotlight, especially when no sooner had the possibility of an appearance by a Hummingbird Hawkmoth been discussed when one was found feeding on the Valerian on top of the northern end of Niffy bay cliff ! No apologies for the many photos of of the moth as it fed in the style that gave it its name (above). Hummingbird Hawkmoths arrive to delight us from southern Europe and north Africa in spring and summer, more numerous in some years t 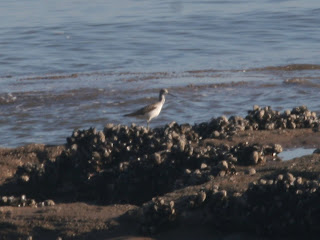 han others. Newly emerged from the main pond was an immature Four-spotted Chaser dragonfly (above,bottom right), possibly the first proof of breeding of this species at Hilbre, although this statement will have to be checked. Also just emerged were the first Blue-tailed Damselflies to be seen this year. Red Admiral and Green-veined White flew in the morning and more butterflies are expected as the afternoon warms up.Two bird species seen today were most unexpected in June, a Greenshank (left) was at the north end for some time with the few Oystercatchers that are still with us, and then moved east along the 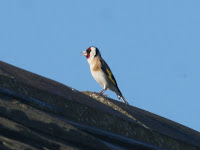 tide line towards the north Wirral shore. Also out of season was a Chiffchaff that was singing in various places on the island before being caught in the 'heli' and ringed. Species that 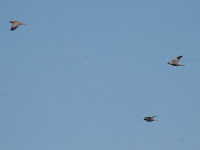 seem to be increasing their visits to Hilbre showed in the form of 4 Collared Doves (left) and 3 Goldfinches (right), but the Lesser Redpoll that passed through is more of a spring and autumn passage bird.Very few seabirds early in the day in the calm conditions but 11 Sandwich Terns were noted feeding off shore. Ringed:- 2 Linnets, 1 Chiffchaff. (DB,AMC+1,CJ) [607-38] photos CJ
Posted by Colin at 13:32