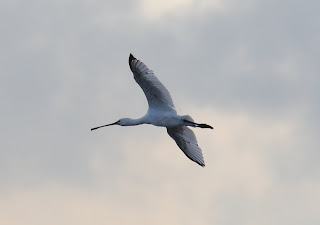 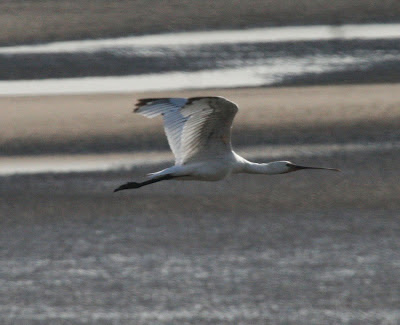 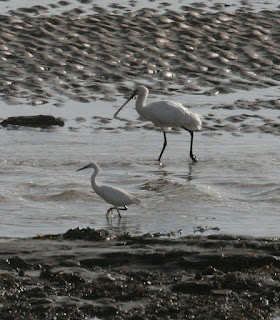 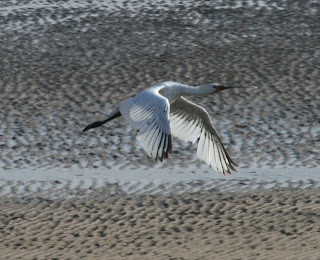 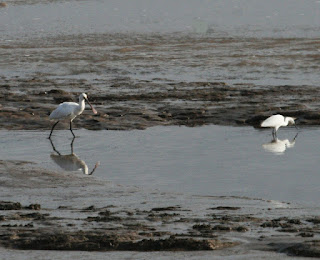 At 08.35hrs this morning a Spoonbill flew up the west side and across the north of the island and settled to feed for some time with 2 Little Egrets in the east gutter, staying long enough for a couple of members to twitch it from the mainland (above). This is only the 3rd record for Hilbre and the second that bothered to stay and feed. Earlier a drake Eider floated slowly in from the east and sat on the rocks but did not linger more than a few minutes (bottom left). Still no warblers on the island apart from the Blackcap that was ringed yesterday and has now been here for 3 days, obviously f 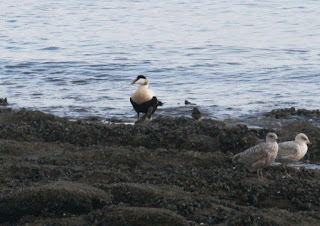 increasing in weight by a gram and a half and showing yellow pollen from the blackthorn on its bill (right). As the morning warmed and the breeze dropped almost to zero, hirundines passed through totalling 23 Sand Martins and 33 Swallows and a Wheatear appeared at the north end. Goldfinches (19) again were the main finches, although a couple of Lesser Redpolls and a flock of 4 Siskins also went through. A few Pied Wagtails including 4 Whites were noted but no Yellow Wagtails or Tree Pipits have yet made the log sheet. A calm sea made for easier vision and 16 Little Gulls fluttered out towards the windfarms, also 60 Sandwich Terns and 50 Gannets. Quite surprisingly there are still 104 Brent (including 2 dark-bellied) on the shore, as we expect the majority to be gone within about a week. Later in the afternoon the hirundine passage continued with an extra 35 Swallows, 25 Sand Martins and 2 House Martins, the first this spring. Ringed :- 2 Linnets. (BSB,DB,AAB,AEH,CJ,THM+3,BT, et al) [311-20] photos John Ball (top Spoonbill) CJ (rest)
Posted by Colin at 14:23