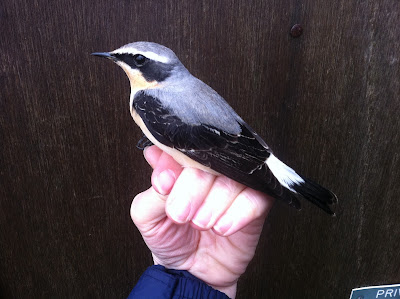 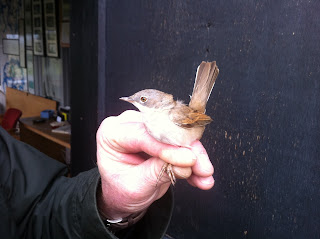 Light drizzle and a drop in the wind strength produced more quality than quantity today with good movements of swallows early on. Several Wheatears moved through including two Greenland race that were trapped and ringed (above right), the first Swift of the year moved through about 0730 followed by another later. Several phylloscs were present along with two male Blackcaps (above) and the first Whitethroat (right) which came straight in to the obs garden from the West, a Tree Pipit was heard over head and several White Wagtails were also moving through. A few small flocks of Dunlin and Ringed Plover were noted along with 40 Bar Tailed Godwits, 6 Whimbrel and good numbers of Knot. The weather deteriorated by lunch time as the tide flooded.
Ringed:- 3 Willow Warblers, 2 Blackcaps, 2 Greenland Wheatears, 1 Whitethroat
(DB,CJW, et al)     [ 356-21 ]
Posted by Colin at 17:51