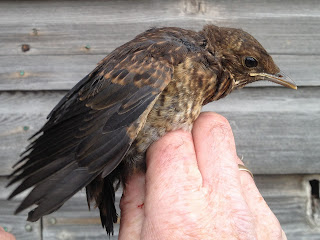 A cool north easterly did not feel hopeful this morning but at least it did not rain. A single Chiffchaff was ringed and a Willow Warbler and Blackcap from Thurs were still on the island. Three Greenland Wheatears rapidly moved south along the ridge very early and another appeared later on the island. Swallows also showed in small numbers (8) before 7.00am but just another single before noon. Fifteen Goldfinches were the only other small migrants. Two newly fledged Blackbirds were ringed, the first from one of the island nests (left), following the adults recently being seen to be carrying food. No dedicated sea watch today but single Sandwich Tern, Common Scoter and Red-breasted Merganser were logged. Up to 12 Whimbrel and a Little Egret were on the shore.
Ringed :- 2 Blackbirds, 1 Goldfinch, 1 Chiffchaff
(CJ,DCT,PT,NDW,PSW,SRW)    [ 360-21 ]    photo  CJ
Posted by Colin at 12:36