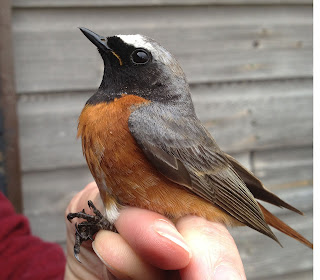 rewarded with the best ringing day so far of a generally poor April.

Twelve Willow Warblers (left) and a Chiffchaff in the gardens this morning was a distinct improvement and a superb male Redstart (right) located around the obs garden was nevertheless quite elusive, disappearing for long periods, before being captured in the garden mist net. The Redstart when examined had somewhat malformed legs and so it was decided not to ring the bird, even though it appeared in perfect health and had just returned from Africa. Small migrants were few apart from the Willow warblers, only 4 Swallows, 2 Pied wagtails and 12 Goldfinches, but a notable bird was a trapped Wren (below left) that was ringed elsewhere, proving what we all knew that not all Hilbre Wrens are residents and many are migrants at times of passage. Another first 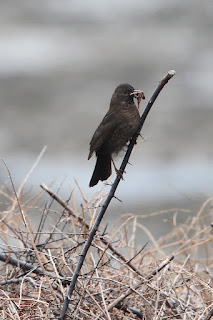 for the year after the Redstart were 2 Tree Pipits heard calling as they flew overhead, and to complete the trio of new species 4 Little Terns flew west across the island in the afte 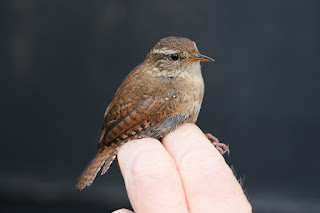 rnoon, presumably having just arrived in the area and ready to breed at Gronant. Other seabirds today included 15 Sandwich Terns, 25 Gannets, 1 Kittiwake, 5 Razorbills, 4 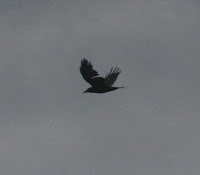 Common Scoter and 4 Red-breasted Merganser. Four hundred Knot flew north east past the north end while 2 Whimbrel called around the island. A Rook flying over from Wales towards red Rocks was an unusual visitor (left). The Breeding season is now well under way with Meadow Pipits, Wrens and Linnets all doing their stuff, and there seems to be at least 2 pairs of Dunnocks, also 2 pairs of Blackbirds, which were seen to be feeding young (above right).