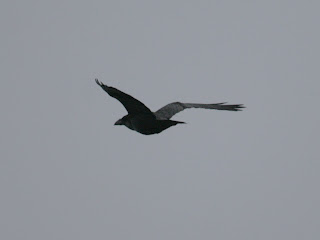 A cold day with the ground frozen and the island surrounded by 'weather' but the snow kept off until after 11.00am. Two Ravens (left) flew around the island harassed by 4 Carrion Crows, probably the islands own crows were involved.
At about 10.00am one of the crows was seen to attack a Hen Harrier (below) that appeared low over the south end. The feuding pair gained height and eventually headed away to the east until out of sight, but not before flushing the Brent Geese and waders on the tide edge. (bottom) 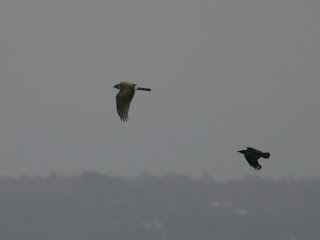 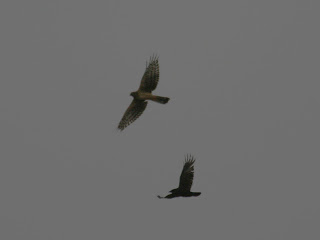 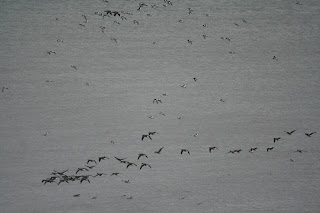 Common Snipe was down north of the main pond.
Two hundred and fifty Grey Plover were observed by the flooding tide, also a Peregrine flew from Little eye to the main island and 4 Common Scoter were in the gutter.
There are still a good number of Blackbirds and Song Thrushes present, 3 and 1 were ringed today respectively.
(DB,CJW) [ 5 ] photos CJW
Posted by Colin at 20:53