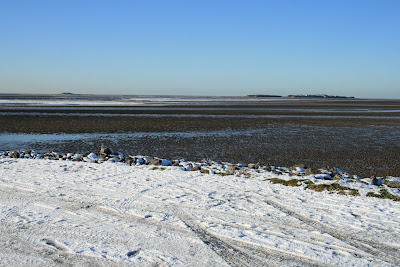 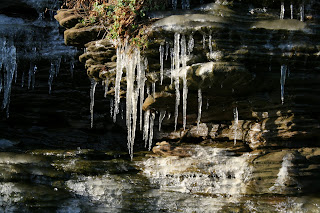 Another cracking day on the island today. Observers were greeted with a frozen shoreline and island and this provided some wonderful views of the estuary and the islands. 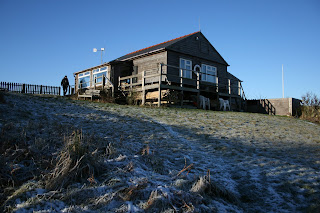 Yet more thrushes were on the move with at least 34 Fieldfare, 16 Redwing, 15 Song Thrush, single Mistle Thrush and 4 Blackbirds recorded on or over Hilbre. Of which 4 new Song Thrushes and a Redwing (see below) were caught and a Blackbird was retrapped. 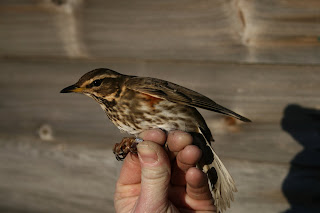 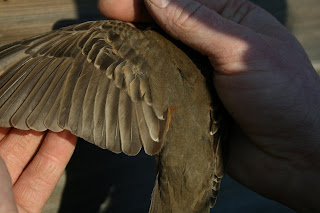 Also around the island were single Snipe again near the main (frozen) pond but cold weather movement overhead continued with 113 Lapwing moving in small flocks throughout the day and 8 Skylark.

(Redwing below left and Song Thrush below right). 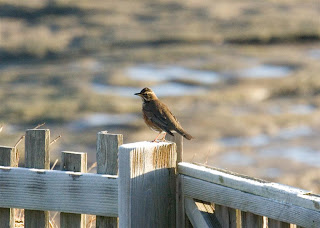 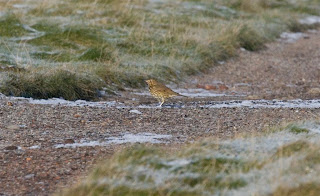 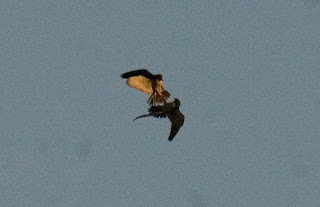 Two fighting Peregrines 'screaming' above the trapping area (left) provided a brief distraction for observers but the main events of the day were wildfowl.

The Eider was still present around the North End and 3 Goosanders passed right over the Obs garden. Then a single female/imm Velvet Scoter (below) was found a hundred yards or so off the North End; it only stayed briefly but was seen well by everyone before it flew off north. 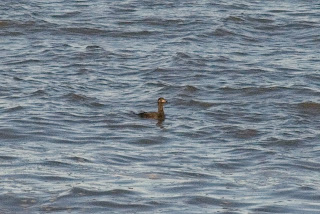 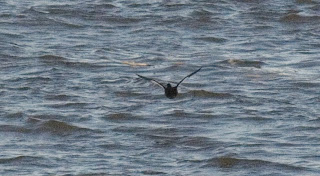 Not to be outdone g 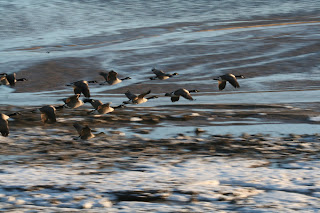 eese and swans were well represented by 2 Mute Swans, the Brents and a large flock of c55 Canadas (left) that flew down the east side of the island. However, during the afternoon two flocks of White-fronted Geese totalling 58 birds were observed flying passed the islands - quite a rare bird at Hilbre. 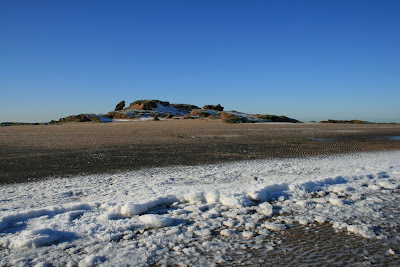 I notice that you are still trapping birds despite the extremely cold weather.

I'm not sure on the protocol of bird ringing, but would you not consider suspending this practice until the weather improves, or do you do something to mitigate the impact on the birds?

Thanks for your comment and you raise an important point. We always consider the weather when trapping and ringing birds but even more so during prolonged spells of cold weather.

The temperature on the island is nowhere near as cold as it is on even the nearby 'mainland' however it is still cold and birds will be coming to Hilbre from the mainland.

We have already suspended our wader ringing efforts during this cold spell and we have also suspended the use of mist nets and potter traps for catching passerines. But we are also fortunate at Hilbre to have 'heligoland' traps which are permanent structures (that birds can fly in and out of) so we have continued to catch birds as part of our normal routine.

In terms of mitigation we have also been feeding the passerines on Hilbre on a daily basis during this bad spell and we have also noticed that on Hilbre there is a signifcant snail population that is keeping the influx of Song Thrushes very healthy.

Obviously we will continue to monitor the situation on a daily basis, at the moment however our very modest trapping results indicate that birds are gaining weight well by being on Hilbre.

All the best
Steve