Rain all night and a shift of wind to the west did nothing for migration this morning. It was cold

early but when the sun came through it turned almost balmy.
The surprising news is that the Brent Geese (right) reached a new all time high count from the island of 192 at a time when one might have expected that there would be a slow decline in numbers as the spring approaches. The flock may have been supplemented by birds moving from further south.
Seabirds were hard to come by and distant but 4 Little Gulls and 4 Gannets were noted through telescopes. As the day warmed 5 Pied and 1 White Wagtail (the first this year) flew over, also 2 Skylarks. 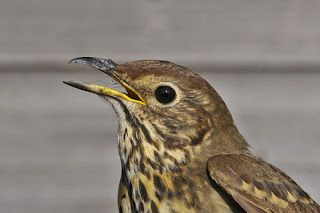 The male Chaffinch from yesterday (above) was still present and was eventually ringed together with a Robin and a Song Thrush with a bill that looked to be slightly abnormal (right), possibly as a result of past damage.
(DB+ESCA,JE,CJ,PSW,SRW, CJW female) + Jeff Clarke and party [27] photos PSW
Posted by Colin at 10:33