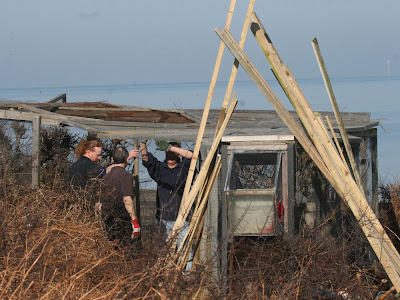 A start was made today on the urgent repairs to the SK trap so that is fully functional in time for the spring passage. The first day of spring felt like summer later in the morning with beautiful sunshine and light winds making the effort almost a pleasure.
Early morning before the work began Blue Tits were heard in the trapping area and 2 were seen together with 2 Long-tailed Tits but unfortunately none of these scarce Hilbre birds stayed on the island. Fifteen Wigeon were logged and a Raven called at midday, probably from the the west side as it could not be seen from the SK trapping area.
(DB,CJ,CJW,PSW) photo CJ
Posted by Colin at 20:04