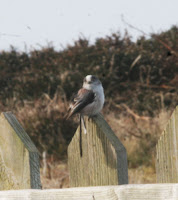 Very little wind today, and very little visible migration, even the Meadow Pipits which have featured in the last few days were confined to the local breeding birds. Yet another Long-tailed Tit, the fourth time this species has made it to the island this year, was trapped in the old obs garden (left), and a Blue Tit was in the new obs garden early on but immediately disappeared. Perhaps the more frequent visits of the Tit family are due to the provision of more feeders around the island recently. Four Goldcrests stayed most of the morning, at least one of which was a bird from yesterday, nevertheless a new bird was ringed. Very few finches, seen or heard right through the high tide were 2 Chaffinches, 2 Siskin, and 6 Goldfinches. A new male Blackbird was present, also a Song Thrush 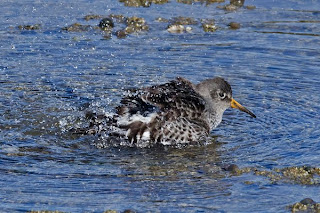 and 2 Pied Wagtails and 3 Skylarks passed over, one of which was singing.
There were at least Purple Sandpipers, possibly more, and one or two bathed in the rock pools at the north end (right). A brief sea watch saw 12 distant Little Gulls, 1 Red-throated Diver and 6 Red-breasted Mergansers. After the tide a female Pintail flew across Middle and off to the south east. 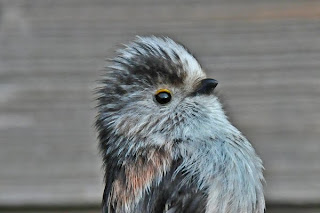 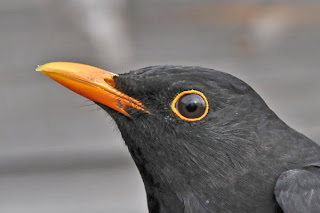