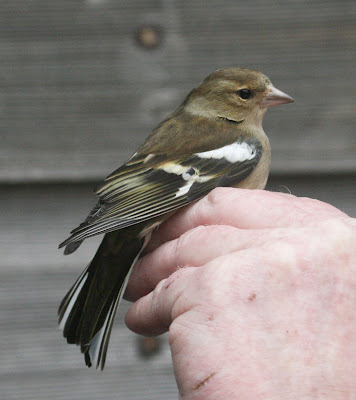 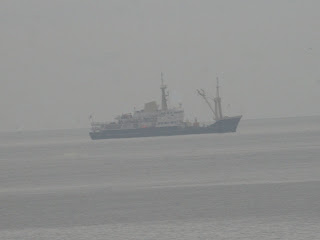 Heavy mist surrounded the islands for most of the day, with the Trinity House vessel (above) that was keeping close order appearing frequently through the haze. There were very few birds new in on the ground apart from 3 Chaffinches. The first of these (right) when trapped was initially thought to be the bird ringed yesterday, but it was soon realised that the ring was not a Hilbre ring and that we had another control for the year in addition to the Long-tailed Tit caught on 12th February. This is quite remarkable as up to today only 15 birds have been ringed this year as migration has not really got going for the spring yet 2 birds have been captured that were ringed elsewhere. Birds seen or heard overhead today included 4 Pied Wagtails, 6 Siskins and 5 Skylarks. 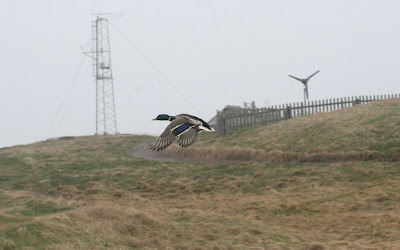 Before the tide a flock of 24 Scaup flew around in circles to the east of the island and then promptly disappeared, otherwise the sea was quiet with just 9 Mergansers and a few Great-crested Grebes seen.
Many species seem to be getting ready for the breeding season with Wrens, Dunnocks, Meadow Pipits and Robins singing, and some of the Shelduck staying closer to the islands, while 2 Drake Mallards were often in the pond area (above). Ringed today :- 1 Blackbird, Chaffinch.
(RA,CJ+VB,CJW,NDW,PSW,SRW,DGW,EKW,NLW,RGW,TGW) [17] photos CJ
Posted by Colin at 16:26