The morning began with almost no wind although the south-easterly overnight had backed north-west before dawn.

Three Shoveler were in the rising gutter early morning and two more were found on the East Hoyle bank later.

However, early signs were good with another fall of Robins on the island and a few phylloscs (Willow Warblers and Chiffchaffs).

Just after 730am the first Goldcrests appeared and it was immediately apparent that it was a multiple arrival with several birds caught on that trap round.

A Spotted Flycatcher appeared appropriately fly-catching around the 'Heli' garden before moving around the island for the rest of the day.

A drake Tufted Duck flew around off the North End and flocks of presumably returning Common Scoters (325) were close in shore on the mirror like sea, along with the semi-resident Shag and over 800 Cormorant.

A single Tree Pipit is a nice autumn record for the island of a species which is more regular in spring here.

An excellent morning slowly petered out as the sun burnt through and revealed a warm day.   Just when we thought that was the end of a good day after midday a fleeting view of a Gropper on the wildlife garden fence started a short period of excitement when whilst relocating the Gropper amazingly a Kingfisher was seen at just above head height flying right over the Wildlife Garden and a stunned observer and then, over the Obs garden before literally zooming off South. It called but did not hesitate in its direction and the whole episode last seconds.  Possibly only the third record for Hilbre; after singles on 3 January 1963 and one near the North End on 5 October 1972. 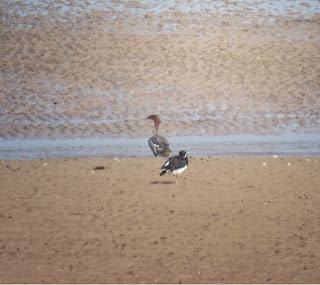 The excitement did not end there with a red-head Goosander appearing to land in some shallow water on the East Hoyle before flying off North; it was later seen fishing off the North End mid afternoon.

Back on the mainland at West Kirby Marine Lake a first winter Mediterranean Gull was found on the pontoons; a typical date for this age of Med here.

News from the mainland of a Wryneck at Meols keeps us going for the next week or so.  See www.lighthousebirding.blogspot.co.uk for more details and photographs.