What could to be the last of the warm southerly days for the time being promised much, and delivered in part but without any great numbers of migrants. It was obvious immediately that there would be no large fall of warblers in the paddocks although encouragement came from overhead Yellow Wagtail and Tree Pipit, a few Redpolls calling and a flock of 4 Collared Doves. Wheatears were on the ground right from the onset but only the odd Willow Warbler. A Sedge Warbler, the first this year, was found in the main pond which later arrived in the garden mist net and amazingly was discovered to be sporting a ring from San Sebastian in Spain, details are eagerly awaited. 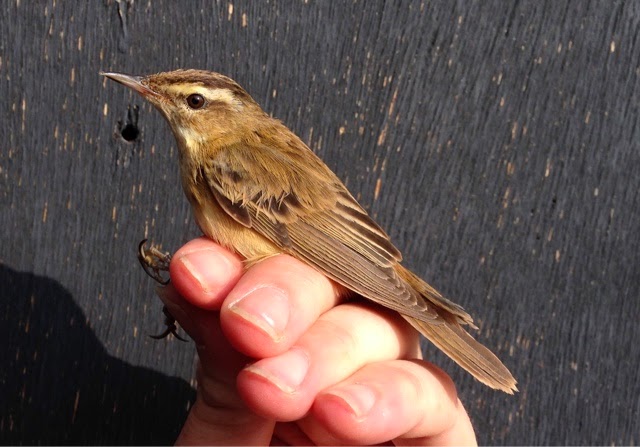 A stunning male Whinchat stayed around the island all morning, which was also a first of the year, as usual obliging the photographers by perching in prominent places, but frustrating the ringers by the same habits. A male Blackcap appeared in the obs garden and was ringed, one of several so far this spring. Other migrants included 10 Goldfinches, 2 Siskins, 25 Swallows, 12 House Martins and 7 Sand Martins, (many of the hirundines moving before a front arriving from the south west). A Skylark was singing over the island several times, it is probably too much to hope it may stay to breed. Waders today included 120 Dunlin, 40 Ringed Plover, and 4 Whimbrel.

Late afternoon the first Whitethroat of the year flew past observers into the SK heligoland trap and was caught and ringed rounding off another great day on the island. 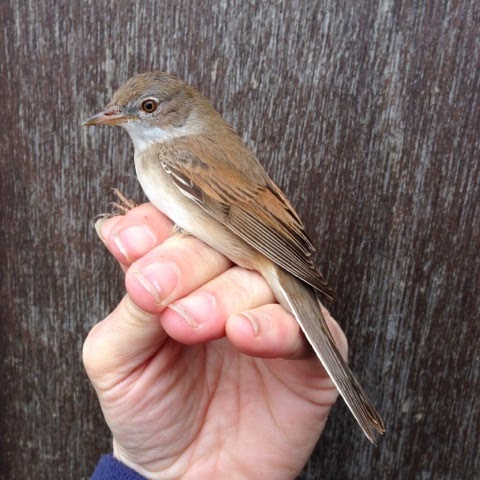