A lovely early spring morning started with a small fall of at least 20 Goldcrests, 3 Chiffchaffs and small numbers of finches passing through including a nice Brambling seen and photographed by visiting birder Tim Kinch and a male Siskin in the Obs garden.  A couple of Reed Buntings whistled their presence to observers out of the fog.


Meadow Pipits continued to push through and at times they blanketed the island in the fog.

A fine nominate race Wheatear appeared on 'Wheatear Way' and was soon the first to be caught and ringed this year but two others also appeared. The bird caught although a fine male was clearly last year's bird with pale worn flight feathers (see below).

Whereas two others were clearly adults with similarly black primaries to their ear coverts.

We managed to show some of the birds to a visiting birdwatching group whose enthusiasm was evident from all age ranges.

Robin passage continued with six new birds ringed and excitingly a control bird caught with someone else's ring on it; we look forward to hearing where and when this bird was ringed.

We will be hoping for larger raptors sooner rather than later...

A lovely day ended with fog enveloping the island and it was with some concern that we could see numbers of people attempting to walk out in limited visibility. 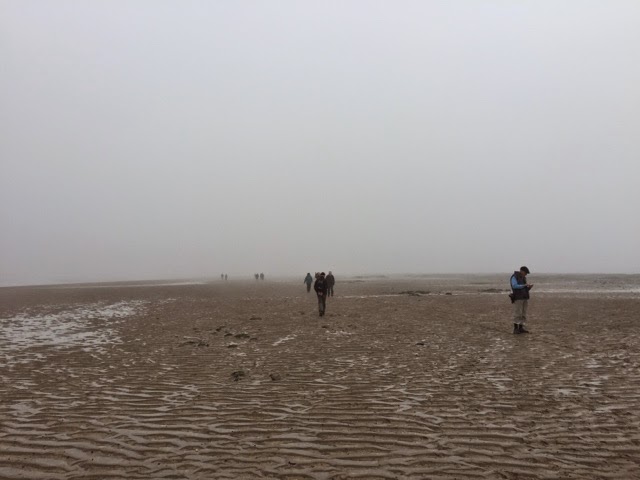 It was no surprise that the coastguards had to rescue some lost individuals later in the day.

Hilbre can be a dangerous place in such weather especially if you don't know the tides - be careful and take note!