Weather: S   force 1/2 distant haze
The morning commenced with a passage of White Wagtails (13) while on the ground were a few Willow Warblers and Chiffchaffs, about 6 of each and several Goldcrests. Unlike yesterday Meadow Pipits were not moving and Wheatears were few in number nevertheless 3 Greenland race were ringed (below).
Once again Sand Martins passed in large numbers (151) and Swallows (57) did not disappoint but house Martins were entirely absent. 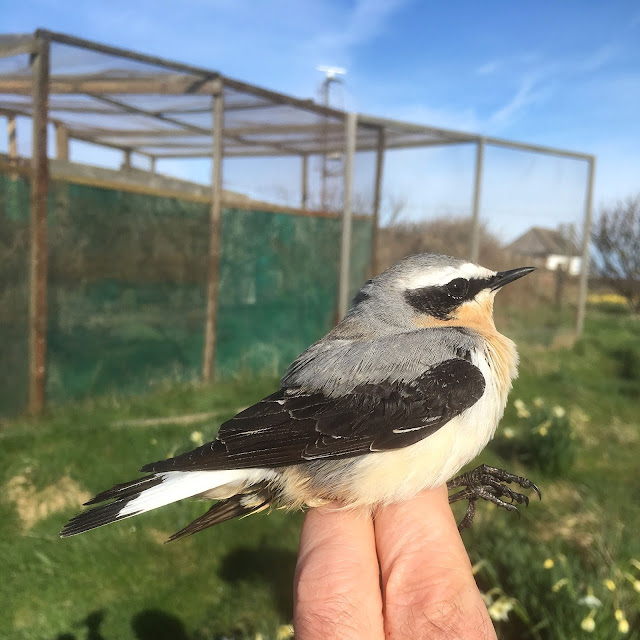 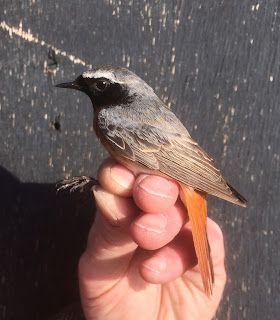 The highlight of today for many was a beautiful male Redstart found in the Newton trap (right), a bird which had been much anticipated these last few days. The first Sandwich Tern of the year was the pick of the sea birds while 7 Little Egrets and a single Whimbrel were on the shore and a pale-bellied Brent swam alone on the water, perhaps all the others have left, time will tell. Other geese today were wandering Greylags(2) and a Canada Goose, and a single Magpie flew in and landed on the mast.
Ringed: 3 Greenland Wheatear, 2 Willow Warblers, 2 Chiffchaffs, 2 Goldcrests, 1 Redstart, 1 Wren. [100-16 ]
Photos CJ