Weather: E force 1/2     mist
Late news of a Spoonbill seen by a member flying north east from the direction of Little Eye at 08.00hrs. A flock of 21 alba Wagtails (nearly all White Wagtails) landed near the north end at the start of the day, and a Merlin was also seen early on. Swallows began moving soon after dawn, about 100 passing through during the morning, but unlike other days they far outnumbered Sand Martins(10), and again no House Martins. Eight Wheatears arrived scattered throughout the island, and there was a small fall of 6 Chiffchaffs and 4 Willow Warblers. A Greenshank attached itself to other waders flying about the island, also a group of 6 Bar-tailed Godwits flew east passed the north end and on the shore there now are 2 Whimbrel to be seen. Highlight of the morning came when a Short-eared Owl erupted from the bracken near the old obs and flew south being mobbed by the gulls. It was again flushed off the cliff by the slipway onto the island and flew off to the west (below). 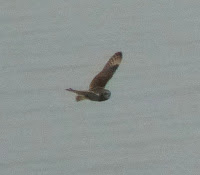 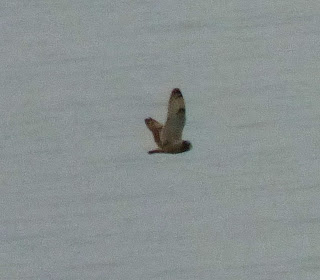 There was a lot of wildfowl to be seen today for so late in the spring: in addition to the single Brent and a pair of Common Scoter, 6 Canada geese landed on the sea off the whaleback (below) and 4 Teal loafed off the east side, only to be joined in the afternoon by 2 Gadwall (a very scarce bird at Hilbre). 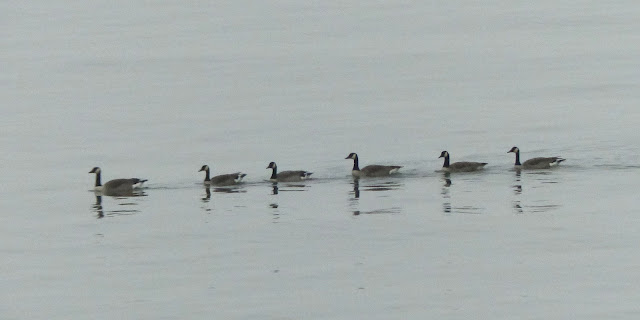 Finches today included 4 Siskin, 2 Chaffinches (in the paddocks), a Goldfinch and a Redpoll. 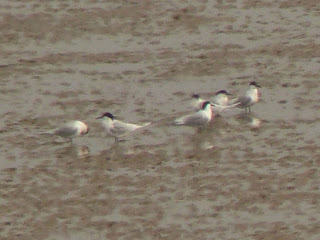 Observers today were treated to the summer sound of at least a dozen Sandwich Terns calling and forming a group on the east hoyle as they do post breeding in the autumn (right).