The first signs of winter? A Red-throated Diver was the first to be noted this autumn, also the 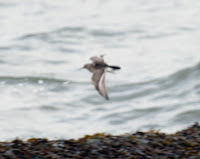 surprise of 2 Purple Sandpipers in partial summer plumage flying passed the slipway (right) but not immediately relocated, although these would probably be on passage further south and not intending to winter at Hilbre. 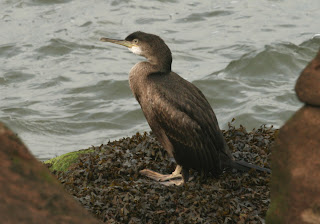 Shags (left) have become more frequent visitors recently and today at least 5 were close to the island, but apart from the diver other seabirds were scarce, just 2 Gannets and a few Great Crested Grebes.

All in all a slightly better day with a Spotted Redshank, 2 Redpolls and irregular Hilbre birds Woodpigeon and Dunnock seen, yet another Garden Warbler ringed (below left) and 7

Goldcrests grounded. One of the 4 Goldcrests ringed was

interesting as it seemed certainly to be a female at first glance (left) and also on wing measurement yet on examination showed some of the male characteristic of orange among the yellow of the crown stripe (right). This is thought to occur occasionally in older females. 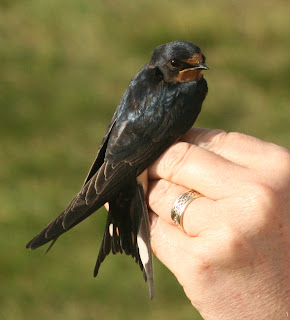 Only 7 Swallows and 2 House Martins seen on the island today yet one young Swallow managed to fly into a mist net! 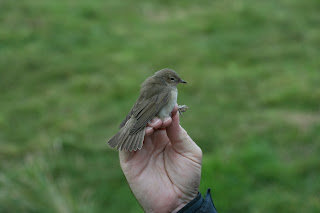 (DB,CJ,CDT,PT,DNW,PGW,SRW) All photos by CJ